Ramps are a stinky springtime specialty

Ramps are a stinky springtime specialty 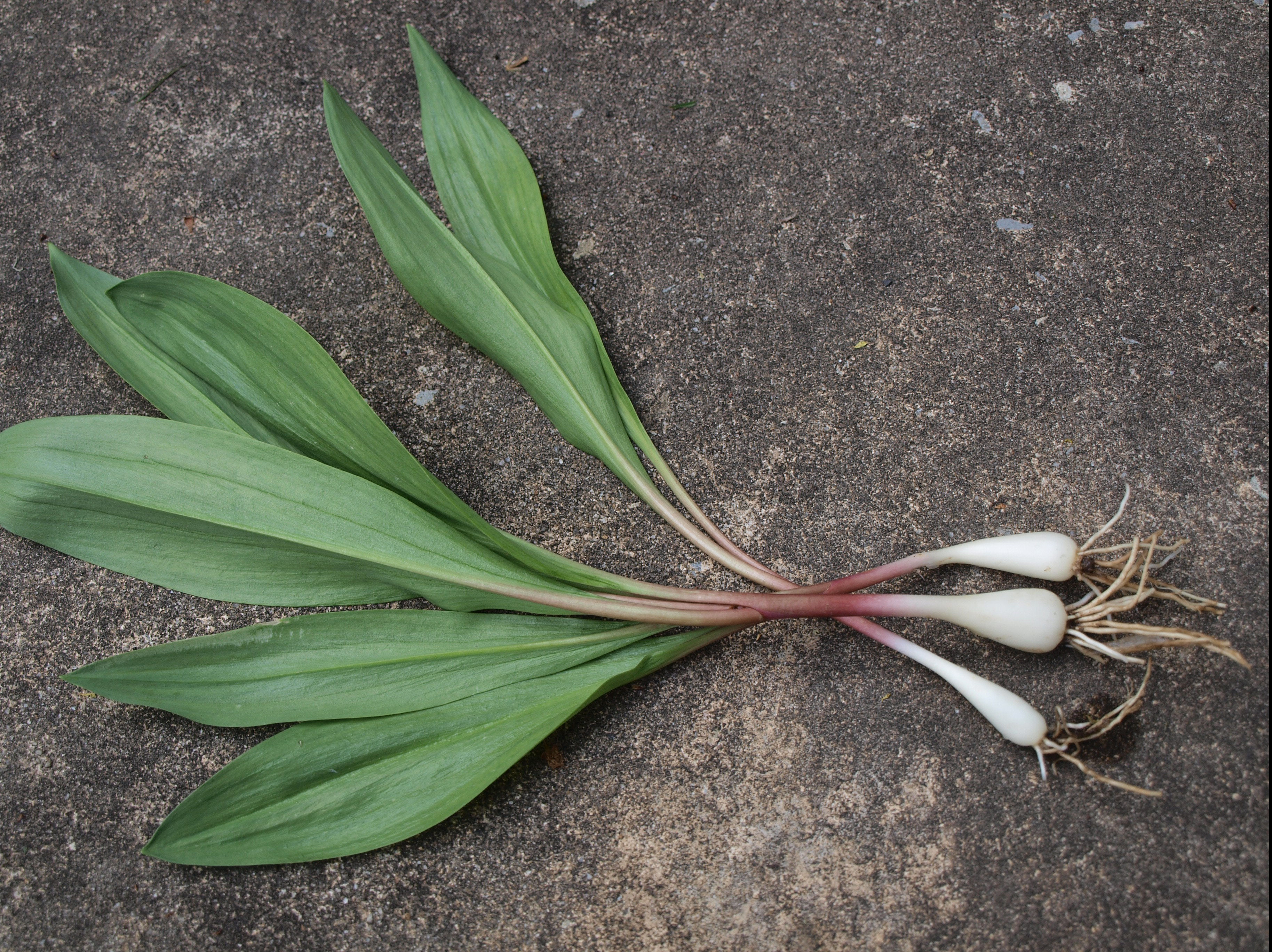 Springtime in West Virginia means it’s ramp season. Ramps, also known as wild leeks, are a wild edible plant that’s known as the first green of the season. The plant has been eaten for generations as a spring tonic and is nowadays celebrated across the country at community festivals small and large called ramp feeds.

If you’re not from West Virginia or Appalachia you might not have heard about ramps. For most people who do know about ramps, they either love them or hate them. In 1954 Arthur Hudson wrote “People who eat ramps say there is nothing like a ramp. People who don’t eat ramps say the same thing, adding the word ‘fortunately’”. Ramps are known for their strong, garlicky aroma which can sometimes last for days. Ramp enthusiast Frank Laker once said “I loved them things, but it’s kindly strange… …my favorite dog wouldn’t have nothing to do with me the next morning…  I went out and blew my breath in his face, and he put his tail between his legs and run”. Those who do enjoy them speak highly of them, and some have even written poems and songs praising the ramp. Glen Facemire acknowledges their strong scent, but thinks their reputation is worse than they deserve: “when it comes to eating ramps there’s no exception for personal hygiene. Whether you’re eating onions or garlic or whatever. Ramps seem like they take an extra beating when it comes to smell. They get accused of a little more than they deserve. But someone asks ‘can you eat ramps and go to church?’ You can but you’ll have your own pew”.

Ramps, scientific name Allium tricoccum, are a member of the lilly family which includes onions, garlic, leeks, and other wild edibles. They can be found in a large area of North America roughly from New Brunswick west to Minnesota and south to North Carolina and Tennessee. They’re especially common in the Appalachian mountains. In West Virginia they are most abundant around the Monongahela National Forest. Growing up in Hancock County, WV Folklife Master Marion Harless had never seen a ramp until she attended West Virginia University in Morgantown. Ramps can be found on shaded hillsides, often north-facing. You can identify them by their flat, green rabbit-ear or tongue-shaped leaves, red stalks, and white bulbs (they sometimes have white stalks as well). The leaves are tender in the early Spring and the plants become tougher and smellier throughout the season and eventually flower in Summer. Some people like Glen Facemire prefer to eat ramps as early as possible before they sprout leaves and the bulbs are tenderest.

Ramps have been in eaten in North America for thousands of years. Native Americans like the Cherokee long valued the ramp as food and medicine, and continue to gather and enjoy them to this day. In fact, the name Chicago is said to be derived from the Menominee who referred to the area as the “skunk place” for it abundance of ramps. The Eastern Band of Cherokee Indians hosts an annual Rainbows & Ramps festival each spring in Cherokee, NC which coincides with the opening of trout season. European settlers also learned to enjoy the plant, and many of them were familiar with its European relatives like bear garlic (also called the ramson). African slaves sometimes supplemented their diets with wild greens like ramps.
Ramps are the first edible green of the season, and are soon after followed by other wild edibles like dandelion and poke weed. Because they appear early in the season and are packed with nutrients they were an important fresh nutritional supplement for mountain inhabitants whose winter diets consisted of dried foods like beans and corn and lacked fresh vegetables. Ramps were traditionally cooked in bacon grease and eaten with potatoes, beans, cornbread, or scrambled with eggs.

They say an apple a day keeps the doctor away, but what about ramps? Both the Cherokee and European-Americans historically used ramps as a “spring tonic” to cleanse the blood, heart, or sinuses, and as a remedy for the cold, cough, and flu. Ramps are said to prevent cold and flu, the reason being if you eat ramps your breath will too bad for anybody to get close enough to infect you. People have long believed in the health benefits of ramps, but scientists are just beginning to explore the medicinal qualities of ramps which contain more vitamin C than oranges, and have compounds with antibiotic properties. Some studies have even linked it to anti-cancer properties. So there may be some truth in the old saying “by eating ramps in May, all the year after physicians may play”.
Beginning in the early 20th century as fresh food became commercially available the importance of ramps shifted from survival to socialization as rural communities started hosting public community gatherings to celebrate the ramp. Nowadays there are dozens of such festivals throughout the country, particularly in West Virginia, Tennessee, and North Carolina. Here in Randolph County you can attend annual ramp suppers in Helvetia, Pickens, and Elkins. The menu at these gatherings is almost always the same: ramps cooked with bacon, potatoes, or eggs and served with cornbread.

A ramp festival started in 1954 in Cocke County, TN was attended by thousands each year including celebrities like Bill Monroe, Tennessee Ernie Ford, and president Harry Truman. Richwood, WV is the self-proclaimed ramp capital of the world and is home to the annual Feast of the Ramson, one of the longest-running public ramp feeds in the country. The feast attracts over two thousand attendees a year and provides a major economic boost for a town whose population has been declining, and many former residents return each year for the feed. Because there are few business in the town it’s a major fundraising event for the Chamber of Commerce. As much as they help local economies, ramp suppers are also important social events that bring local communities together and welcome outsiders.
Although they help draw people together, ramps have been the basis of many pranks over the years, both friendly and unfriendly. Perhaps the most (in)famous involved Jim Comstock of Richwood who was the editor of the West Virginia Hillbilly, and was a known prankster. Comstock once used ramp juice in the ink of an edition of the weekly publication Richwood News Leader. The odor it created, and the reactions of his readers, was so bad that he was officially reprimanded by the Postmaster General. Glen Facemire remembers school children causing trouble by putting ramps in the air-conditioning system. Bert Abrams of North Carolina and his friends once used ramps to retaliate against a bully by sabotaging his car: “So a bunch of us boys got a bunch of ramps and put them under his seat, and under the floor mats, under the carpet in his ’49 Ford he had. So, he got to smelling all this dang crap, and just started raising holy hell about it. He found them under the seat and thought that eliminated it. Well, he still had that many more under the carpet under the back seat.”

Ramps have been enjoyed locally for generations, but in the past twenty years or so ramps have started appearing in gourmet restaurants and fine-dining establishments all over the country. Celebrity chefs like Mario Batali have used ramps as ingredients in their restaurants. At a fancy restaurant you might pay more for a serving of a few ramps than you would for a whole pound at a ramp festival or a roadside vendor. All over the country people have been cooking ramps in creative ways that go far beyond the traditional pork and potato pairing. Ramps were traditionally preserved year-round through canning or pickling, and can now be frozen to save for later (though it’s recommended that you double-bag them). Ramps can also be saved by making into salt, sauces, or other condiments. Kirkwood Winery of Summersville has even made a ramp wine! Ramps can be used in just about anyway you might use garlic, onions, chives, or leeks, and a whole lot of other ways too. Elkins has been home to several ramp-themed events that have seen all kinds of creative chefs using ramps in unexpected ways as ingredients in empanadas, pepperoni rolls, and even ice cream. For the past eleven years Elkins has been home to the Ramps & Rail Festival which features local and regional crafters and food vendors who showcase the ramp as the main ingredient.

Ironically, the increasing popularity of the ramp might be threatening its survival. As more and more people enjoy the plant, the increase in demand is outpacing the supply as it naturally occurs in the forests and its harvest is not always sustainable. Ramp dinners and festivals directly benefit the economy of the communities that hold them, but does increasing attendance threaten the supply of this special plant? Glen Facemire ships ramps to chefs and growers all across the country and can barely keep up: “The demand now is like it has been for the last 15 or 20 years. Almost more demand than we can supply, so you got to do some plantin’ somewhere down the line. Just like Johnny Appleseed”.

Experts urge that if you harvest wild ramps that you do so in a way that ensures the patch continues to produce over the years. One way is to simply leave a portion of the patch untouched. Another is to replant the roots and a quarter-to-half-inch of the bulb. Cherokee often cut off these “rootlets” attached to the bulb and replanted them so that they grow back. You can even start your own new patch by planting bulbs or seeds in a shaded spot. But be patient as it may take at least five years before the plants are edible when planted from seeds. Planting the seeds is less damaging to the existing patch than harvesting the bulbs. And like other flowering plants, ramps are good for attracting pollinators. By taking care of this unique plant we can continue to enjoy it year after year as people have for generations. Like Glen Facemire says, you can have your ramps and eat ‘em too.
-Ben Duvall-Irwin

Appalachian History: “The King of Stink”

Library of Congress: Ramp Suppers, Biodiversity, and the Integrity of “The Mountains”